Bishop Paul Tighe from Ireland is the Secretary.

He was born in 1958 and grew up in Navan and Sligo, graduating from University College Dublin in 1979 with a degree in Civil Law. Having studied for the priesthood at Holy Cross College, Dublin and at the Pontifical Irish College in Rome, he was ordained a priest of the Dublin Diocese in 1983.

In 2004, he was named as Director of the Communications Office of Dublin Diocese. In 2005, he established the Office for Public Affairs which aimed to promote the engagement of the Diocese with public institutions and civic society.

Below is his intervention at the Lisbon Web Summit, November 2016 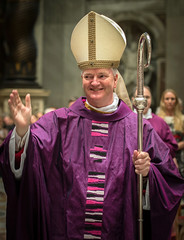